Creative Technology Ltd today announced that the hot-selling Sound Blaster® Roar portable Bluetooth wireless speaker is now available for sale in the US for the first time at an unbelievably attractive factory-direct price of USD149.99. 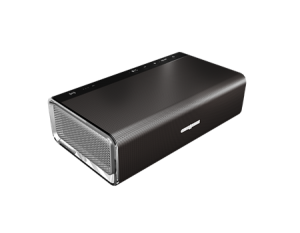 Sneak previewed at CES 2014 in Las Vegas in January, the Sound Blaster Roar, a new concept, 5-driver high performance portable Bluetooth wireless speaker simply blew people away the moment they heard its astoundingly powerful, precision-tuned, high fidelity sound, emitted from a very compact and portable booklet-sized form factor. It generated such great interest and positive comments from the media and general public alike – almost everyone who saw and heard the product demonstration at the Creative booth wanted to buy one right away.

At its pre-launch at the IT Show Singapore, the Sound Blaster Roar wowed the huge audience that thronged the show with its amazing audio prowess. It generated long queues and sold like hotcakes – scoring a very impressive record of an average sale of ‘more-than-one-unit-sold-per-minute’. It virtually flew off the shelves within the show’s opening hour each day, making it the hottest selling speaker at the 4-day cash-and-carry show. At the recently concluded PC Show Singapore, it achieved an even more astounding sales record of ‘one-unit-sold-every-30-seconds’. The IT Show and the PC Show are the largest annual consumer electronics shows in Singapore. With the loudest sound from the smallest form factor, the feature-rich Sound Blaster Roar simply out-performed, out-featured and out-priced every other portable wireless speaker at the shows. It out-sold all other speakers at the shows several times over.

Designed to rival existing home stereo systems in sound quality, yet light enough to be portable, the sleek metallic Sound Blaster Roar measures only 2.2 x 7.9 x 4.5 inches and weighs 2.4 lbs. Dubbed the ‘Audiophile Sound Booklet’ by audio aficionados, it was engineered from the ground up with Creative’s expertise in audio technology and years of research and expertise in speaker design, and represents the pinnacle of portable wireless audio. Its superb audio performance is set to redefine the home stereo and wireless speaker market – by combining wireless connectivity, portability, high fidelity and audio power all into one compact unit that can rest on the palm, and be brought along on-the-go for a truly mobile digital lifestyle.

“Many portable wireless speakers are designed primarily to be small and compact. They hardly suffice in audio fidelity to provide decent sound as a home stereo system. In the designing of the Sound Blaster Roar, we’ve approached it from the opposite direction. By incorporating advanced acoustic design elements, we focused on high quality audio performance first and portability second. Then we embarked on a near impossible mission to make it small, feature-rich, sexy and cost-effective by defying many laws of conventional acoustic engineering. This has allowed us to create the first high performance home stereo-grade wireless speaker that can be taken on-the-go. The end result is an astoundingly powerful but compact and sexy portable speaker that blows people away everywhere it goes. Many people did not believe what they heard when they encountered the Sound Blaster Roar – they were hunting around for a hidden external subwoofer!” said Sim Wong Hoo, Chairman and CEO of Creative Technology.

“The audio power of the Sound Blaster Roar is simply mind-shattering for its size and precision fidelity. To top it off, we are making it available at an irresistible, take-no-prisoners factory-direct price of USD149.99! I believe the Sound Blaster Roar is by far the best portable wireless speaker in its class in the market. It is a no-brainer purchase for anyone who is looking for a powerful and portable wireless speaker,” added Sim.

Since its launch, the Sound Blaster Roar has garnered many positive early reviews:

“First and foremost, audio performance is exemplary of a speaker of its class and size, and easily rivals and even outclasses lesser 2.1 speaker systems…… the Sound Blaster Roar offered very good clarity, smooth mids and deep, well-controlled bass. It also exhibited very good speed and dexterity…. it represents tremendous value for money and it is a no-brainer for us to recommend to anyone who is looking for a powerful portable wireless speaker.”
Source: HardwareZone.com, SPH Magazines, 2 March 2014

“Overall, the Sound Blaster Roar SR20 is definitely the most impressive Bluetooth speaker we’ve reviewed for quite a while – it not only sounds good, but it’s also extremely versatile, which is all you could really ask for with a Bluetooth speaker.” — Custom PC Review

“The Creative Labs Sound Blaster Roar kinda changes all that with a boatload of cool and unusual features.”
— Inner Fidelity

“The Roar sounds killer, and it’s definitely very balanced: lows are deep and rich, mids are very pronounced, and highs are a well-blended part of the mix. The combination of the three make it sound like a much larger speaker than it actually is. And when you crank the volume, it can handle it – there’s no distortion even at max volume.”
— Android Police