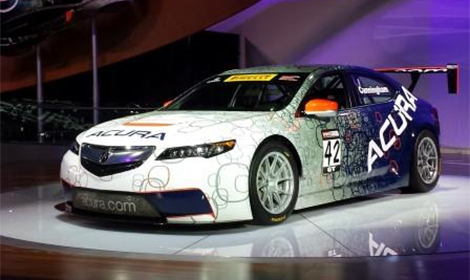 “We’re excited to debut the Acura TLX GT race car in front of our ‘hometown’ audience of associates from the many Honda facilities in central Ohio,” said Art St. Cyr, President of Honda Performance Development and Vice President, Auto Operations, American Honda. “The competition in the Pirelli World Challenge is fierce, including many of the luxury makes the TLX will compete with on the sales floor. Acura has never shied away from a challenge. Instead, we seek it out, both on-track and in the marketplace.”

Developed from the production Acura TLX by HPD and RealTime Racing, the Acura TLX GT features HPD chassis and aerodynamic performance parts approved for Pirelli World Challenge competition. It is powered by a direct-injected, twin-turbocharged V6 engine, developed by HPD from the production TLX, and will utilize all-wheel drive, as found in Acura’s SH-AWD system.

RTR has raced and won with both Honda and Acura products for more than two decades  Since entering the Sports Car Club of America Pro Racing-sanctioned World Challenge series in 1993, RTR has scored a record 85 race victories on its way to 14 Manufacturers’ Championships and 14 Drivers’ Championships.

“The Pirelli World Challenge has a lot of strong competitors in GT, but the TLX is the only all-wheel-drive car in the category. For our four-door sedan to be racing head-to-head with the likes of Ferrari and Lamborghini, among others, is pretty cool,” RTR team principal Cunningham said. “We’re ready to go, and we’re going to show the competition what the Acura TLX GT can do.”

Should We Have This Meeting? – by Wrike project management tools