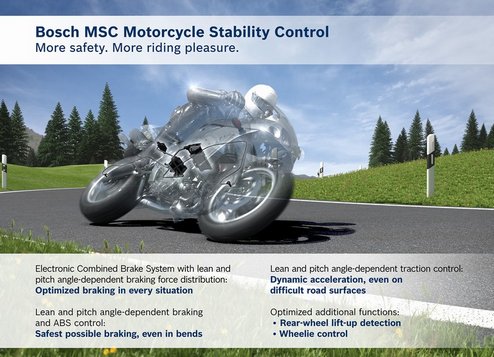 Motorcycling is becoming safer. From 2008 to 2013, the number of motorcyclists who had fatal accidents on Germany’s roads fell by 13 percent to 568. Experts believe that one reason for the decline is the spread of anti-lock braking systems. Summarizing the findings from the German In-Depth Accident Study GIDAS, Gerhard Steiger, president of the Bosch Chassis Systems Control division, says: “ABS is able to prevent a quarter of all motorcycle accidents resulting in death or injury.” This active safety system works to prevent wheels from locking. Motorcycles come to a far safer stop when braking hard or when braking on a slippery surface. 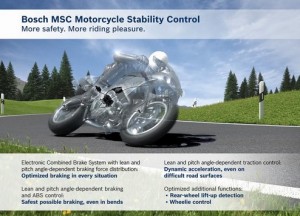 In the future, MSC motorcycle stability control will offer the best possible safety for motorcyclists. Developed by Bosch, the system records the current lean angle and adapts the ABS support and traction control to it. This means that it is especially useful in corners, which is where almost half of all fatal motorcycle accidents occur. “Like ESP in cars, MSC currently offers the best possible support, whether braking or accelerating, and even when the rider is leaning over at a steep angle,” Steiger says.

In 2013, 30 percent of all motorcycles produced in Europe featured ABS. At the end of 2013, the world’s first motorcycle stability control system first went into series production in the KTM 1190 Adventure and Adventure R. MSC technology is based on an ABS system including composite brake function, and also features a lean angle sensor. This measures the current lean of the motorcycle, allowing the system to adjust its braking and acceleration interventions to suit the lean angle. Precise regulation offers a smooth progression in brake pressure as the rider leans in for the corner, as well as boosting deceleration on the straight. And by analyzing tilt rate and linear acceleration, the system can tell sooner when the front or rear wheel is about to lift off, allowing MSC to intervene with a corrective action. Brake force is flexibly distributed between the front and rear wheel according to the driving situation, ensuring the safest possible deceleration. Further GIDAS analyses show that MSC can help in two thirds of the motorcycle accidents that occur in bends due to rider error.

Having taken a modular approach, Bosch can offer brake control systems to suit any type of motorized two-wheeler that features a hydraulic brake. As a cost-effective solution especially for emerging markets such as India, ABS 9 light employs a single hydraulic brake channel to control the front wheel. With two channels, ABS 9 base offers anti-lock protection for the front and rear wheels. ABS 9 plus is particularly suited to high-performance machines. Even while pressure is building up during an emergency stop, the system already intervenes to prevent the motorcycle tipping forward. With the help of an additional pressure sensor, it detects early signs of the rear wheel leaving the ground. ABS 9 enhanced is the top-of-the-line version and offers the eCBS (electronic combined brake system) function. This means that all the rider has to do is apply one of the brakes, whether front or rear: ABS 9 enhanced then automatically activates the second brake to bring the optimum brake force to bear on both wheels without the rider having to apply any additional force on the brake lever and without any alteration in brake pressure. MSC, Bosch’s most comprehensive solution, builds on ABS 9 enhanced by employing a lean-angle sensor.

Weather plays a crucial role in the number of motorcycle accidents

Aside from technology, there is another factor that has a direct impact on the number of motorcyclists killed on the roads: the weather. Looking back over several years, it is clear that the number of motorcycle accidents always increases significantly when the weather is good. In April and May, the number of motorcyclists killed or severely injured seems particularly dependent on the weekend weather. When the sun comes out, many riders choose to make the most of the opportunity to go on their first outing – precisely when they are unpracticed and overconfident. The consequences are often fatal. In 2014, for instance, 37 motorcyclists were killed on Baden-Württemberg’s roads in the first five months of the year, while in the previous year, with its more wintry weather, the number for that same period was just 20. Whatever the weather conditions, ABS and MSC can provide comprehensive support, regardless of whether a bend that was entered too fast unexpectedly becomes tighter, whether a vehicle suddenly pulls out into the road ahead, or whether the road surface is wet or wet in patches.

Each year around 5,000 motorcyclists die on Europe’s roads alone. Convinced by findings from surveys dedicated to the issue, in 2013 the EU introduced a requirement for all motorized two-wheelers with an engine displacement greater than 125cc to be equipped with an ABS system. The regulation applies to all newly registered motorcycles from 2017 onwards and for all motorcycles that go through type approval from 2016 onwards. Smaller two-wheelers with an engine displacement of over 50cc must also be equipped with ABS, or at least a “combined” braking system that brakes the other wheel when one brake is activated. However, such a system does not eliminate the possibility of wheels locking.

Should You Buy A BMW i3?