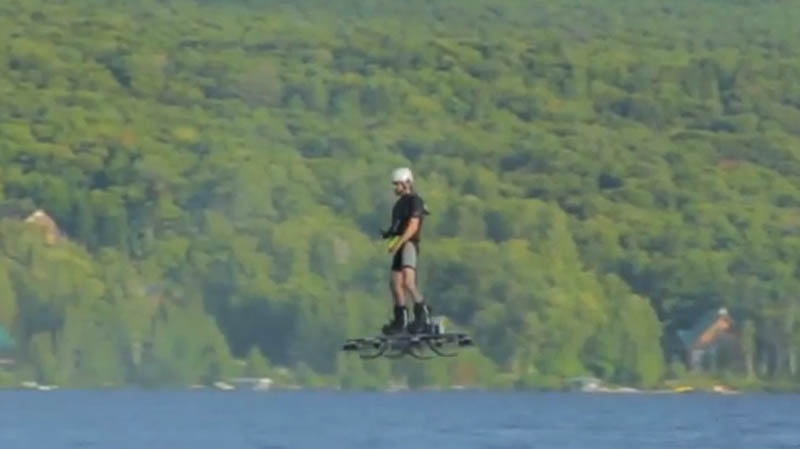 The real-life hoverboard has been announced officially all over the world. It just recently has entered in a brilliant world, flying futuristic skateboard. Catalin Alexandru Duru, the inventor of the prototype hoverboard, traveled the length of two-and-a-half football fields (about 905 feet or 375 meters) to achieve the world record title before landing gently in the sparkling water of Quebec’s Lake Ouareau.

The movie never explains the mechanics of McFly’s hoverboard. But since the fictional device only works over land, it may have lifted off the ground by electromagnets, which would (hypothetically, at least) be repelled by magnetic forces from the Earth itself. Duru’s real-life flying skateboard is a bit simpler than McFly’s: It has a propeller that helps lift it into the air. But just like McFly, Duru controlled the hoverboard using only his feet, he told Guinness World Records. Last year, a California-based company ran a successful kick-starter campaign to support the development of a more McFly-esque version of the hoverboard, called the Hendo Hoverboard. This board is equipped with four electrically charged magnets, or electromagnets, that create a magnetic charge when placed over a copper surface. Copper is an inducive material that creates a strong, repulsive magnetic field that forces the board up into the air and allows it to levitate.

Someday, the board could also be made to hover over aluminum, as well as a variety of nonmetal materials that are also inductors, Greg Henderson, the inventor behind this futuristic skateboard, told Live Science in December.

However, for now, the Hendo Hoverboard has limited real-world usefulness thanks to its reliance on inductive surfaces. On the other hand, Duru’s record-breaking hoverboard can float over any surface, making it a more practical option for the Marty McFlys of the world (at least until someone figures out how to build that flying DeLorean).

Collecting Data is Easy with the Help of Melrose Inc.