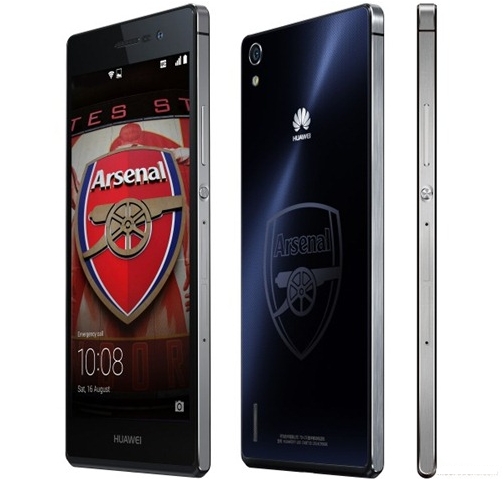 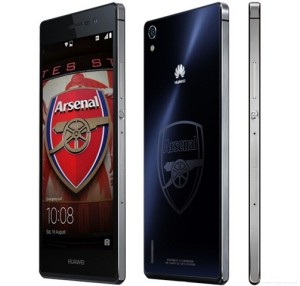 Huawei Ascend P7 stands out from the crowd with a sleek, black metallic finish using stunning Corning® Gorilla® Glass 3 for added protection. The exclusive Smartphone features Arsenal’s iconic club crest, subtly mounted on the rear cover under the tough Gorilla Glass 3. For the added Arsenal experience, Huawei has specially designed many themes to fit any mood including bespoke Arsenal menus. The Arsenal Edition P7 also includes dozens of iconic Arsenal wallpapers with images from iconic Highbury buildings, scenes of the Emirates by day and night, and celebrations of the 2014 FA Cup win. Finishing touches include a working clock based on the famous Arsenal Clock End.

The beautifully crafted Huawei Ascend P7 supports a 5-inch full HD screen, perfect for enjoying entertainment in full 1920 x 1080 resolution. Huawei Ascend P7 is a powerful multimedia smartphone and the Arsenal edition uses this to give a great experience to Arsenal fans with some of the world’s best football games preloaded such as FIFA 14. To keep fans up to date, Huawei offers the brilliant new Yakatak app for updates on games as they happen and a unique direct link to your social networking friends to chat about Arsenal and clubs from 400 leagues.

Richard Ren, President, Huawei Consumer Business Group, Western European Region, said: “We are two powerful brands and this makes Huawei a great match for a club with the global stature of Arsenal. We are enjoying a really successful first six months as Arsenal’s Official Smartphone Partner and are excited to announce the exclusive Arsenal smartphone in time for the new Barclay’s Premier League season. We have a few surprises in the pipeline to make every Arsenal fan’s season the best ever, so watch this space.”

Vinai Venkatesham, Sales and Marketing Director, Arsenal Football Club, said: “The experience for our fans both live and digitally is very important to us, so we’re really excited about the launch of the Huawei Ascend P7 Arsenal Edition. This new limited edition smartphone is designed to help our fans remain connected to the Club wherever in the world they are. We are delighted to be collaborating with Huawei in this way at such an exciting time in the development of its brand globally, and in particular in the UK and Europe”.

To register your interest,  visit: arsenalsmartphone.com